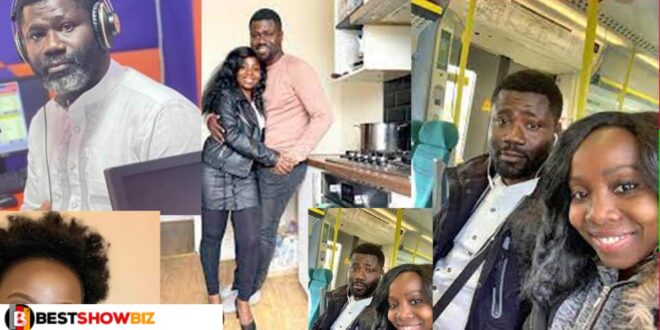 “I bought a car for him and sponsored our wedding, yet he still threw me out”- wife of presenter Nana Yaw Sarfo speaks

Mrs. Janet Owusu, the estranged wife of former Vision 1 presenter Nana Yaw Sarfo, has revealed a chilling account of how her marriage with the former broadcaster came to an end.

Janet Owusu opened up for the first time in an exclusive interview with GhanaCelebrity TV after her former husband, Nana Yaw Sarfo, publicly lamented that his wife had abandoned him, served him divorce papers, and was preventing him from seeing his children.

In the words of Janet Owusu, she suffered through her marriage until it came to a bitter end.

She revealed that she purchased a car for Nana Yaw Sarfo and sponsored their wedding on the condition that she would receive a portion of the proceeds from the wedding, but that this did not occur.

Miss Janet Owusu revealed that her ex-husband, Nana Yaw Sarfo, had fought her for the money and had kept it all, spending it all on their honeymoon, according to her.

In her statement, she stated that Nana Yaw Sarfo abused her financially, emotionally, and physically throughout the course of their marriage. Her revelations included the fact that, in addition to taking advantage of her financially, he was physically assaulting her, particularly after she discovered that he was planning to marry another woman.

Miss Janet Owusu revealed that Nana Yaw Sarfo had called her a cheat and refused to accept responsibility for their first child, which was born just a month after their wedding, in an emotional statement.

Watch the video below to find out all of the shocking details Miss Janet Owusu revealed that caused their marriage to come crashing down.