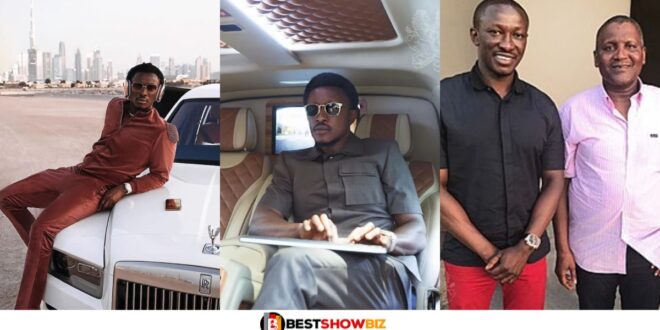 Freedom Jacob Caesar, also known as Cheddar, is a business magnate, philanthropist, and fashionista who hails from Ghana.

He claims that he made his first million pounds when he was just 21 years old.

Cheddar, who is known on social media for his affluent lifestyle, once claimed that he made his first million pounds from selling scarves, but today he is telling a different story about how he made his money.

Cheddar asserted in an interview he gave to Samuel Leeds that in 1994, when he was still a student and owned nothing more than a rackety car, he started his own clothing resale business by using a portion of the money he had set aside to pay for his education.

He explained that he had used the 6,000 pounds that had been given to him by his mother and siblings to pay his fees so that he could begin selling counterfeit Versace and YSL clothing to his friends out of the trunk of his car.

“I made my first million pounds at the age of 21 and I will tell you exactly what happened. I was living in England and I was sent there to go to college and I was selling fake Versace and YSL shirts in the back of my 205 GTI which I bought for 499 pounds.

“My capital when I was going to London was 6000 dollars. My mum, my brothers and everybody gave me 130 pounds which they taught was big money for me but I was laughing in my head…It was in 1994, I remember very well and I bought a Panasonic chip phone and so I was like the new kid on the block.

“Then I met Johnny Prescott, he was selling the jeans and the shirts. I just wanted to buy one pair of jeans and one pair of shit but when I saw the prices, 30 and 20 pounds, I offered him 20 pounds and 15 for the shirt and I put it at the back of my boot and I was selling it for 50 and 40.

So I started making money from the boot but I fell into the streets because I already understood what business was. At that point, business was me from where I was coming from,”