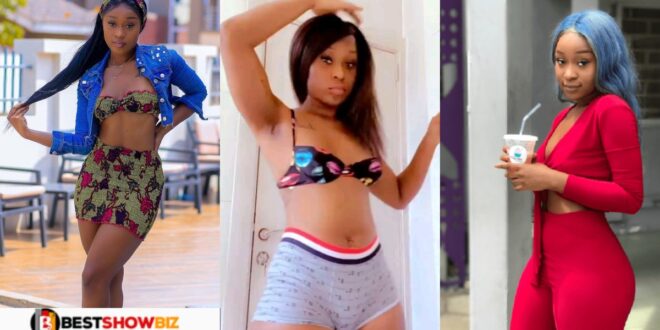 “I am tired of slaying, I think I have to settle and give birth”- Efia Odo

Finally, Efia Odo will be stepping away from the slay life in order to pursue something more fulfilling and meaningful with her time.

The video vixen-turned-actress has exclusively disclosed that she is now in search of a responsible partner with whom she can establish a family because she is growing older with each passing day.

According to the part-time n*dist, she can’t wait to marry the love of her life and give birth to her first kid, which will mark her formal entry into femininity and her official introduction into womanhood.

Efia Odo claimed in an interview with Zionfelix on his “Uncut Show” that she is weary of partying and living the “I Don’t Care” lifestyle, and that she strongly thinks that once she settles down, she would take responsibility of her life and be more rational.

Efia Odo, who is known for her strong opinions, has also stated that she wants to meet the guy of her dreams on her newly launched television reality program, entitled “My African Love.”

Aside from stating that she is working really hard to earn enough money for her marriage and child, the actress also stated that her goal is to be recognized as a mother within the next two years.

she plans to put an end to the half-n*ked images she posts on her social media platforms after she gets married and has a child.