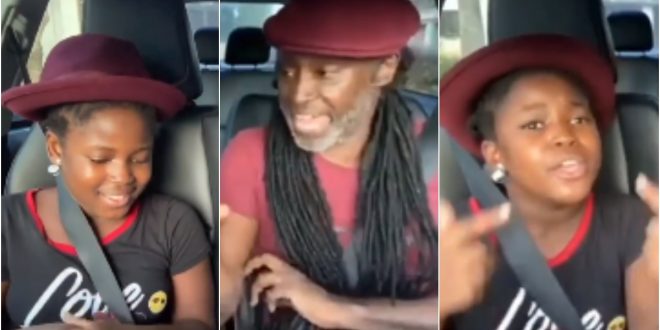 “I am not going to spare anybody that plays with my Daughter”- Angry Reggie Rockstone reveals.

The Grandpapa of Hiplife music Reggie Rockstone has revealed in a video that he is not going to let any man who plays with his daughter on social media go scot-free.

He sent a strong warning to trolls and social media bullies to be careful as he will track down and deal with them with the law should they send their savagery the way of his 6 years old daughter.

He said this remarks after a twitter user posted that he and his squad will gang rape the little girl.

In an interview with Konkonsa, he revealed that he is still on a hunt for the particular individual who posted such and evil thing on twitter.

”I’m not an ordinary guy. The child’s grandfather is an Ex-President of the country. He’s not just a common person. And you look at his father too, [you know] I’m from a prominent family. You can’t talk rubbish like that”, he said painfully.

”In the history of Reggie Rockstone, I think that will be the first time in the history of Reggie Rockstone in Ghana, West Africa to be precise, that I was angry. I don’t get angry. And I’d like to take this time out to apologize to all who were offended by my language. But for a man to write that you would like to have gang sex with my 6-year old daughter was the worst thing ever. I don’t care whether he is an SM fan or standing fan or fan milk…I’m gonna deal with him like I promised.”