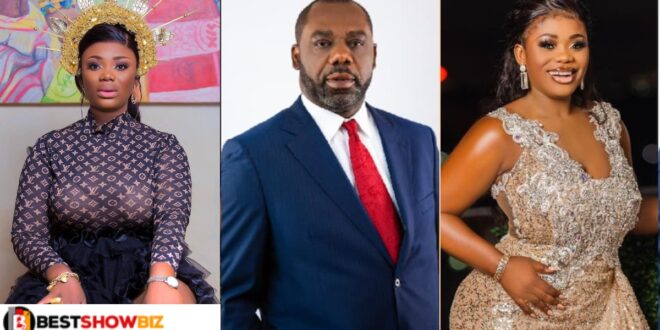 Sally Akua Amoakowaa Mensah, also known as Akua GMB, has responded to rumors about a love relationship she has with Ghana’s Minister of Energy, Hon. Matthew Opoku Prempeh.

The former Ghana’s Most Beautiful winner claimed unequivocally in an Instagram post that she had no romantic involvement with the Honourable Minister.

She is outraged by the news since the minister, widely known as NAPO, is like a father to her.

Akua GMB went on to say that she has known NAPO for a long time and asked Ghanaians to dismiss the falsehoods.

She then threatened to sue the ghost Snapchat user, emphasizing that she is not a promiscuous woman and will never be so cheap.

Take a look at what Akua wrote down below.

‘I have learnt with utter shock and dismay write up about a purported affair with the honorable NAPO by an unscrupulous pseudo “snap-chatter”.

There is absolutely no denying the fact that I have known the respected NAPO for an exceptionally long time even before I was crowned Ghana’s Most Beautiful and in fact his contribution towards my victory cannot be overemphasized. He is like a father to me and will remain as such forever!!

I urge all well-meaning Ghanaians to disregard the unsavory comment that seeks to drag my name and NAPO’s hard-earned reputation in the mud just for some cheap hype. I, Akua Amoakowaa Mensah, am not promiscuous and will never be promiscuous.

This also comes as a CAUTION to those who take delight in ruining people’s lives with their ghost pages without considering its effect on the victim’s family. I wont tolerate any more of the lies and the shame you lots bring me.

The appropriate quarters have been informed to investigate and WHOEVER is behind this will be dealt with accordingly.