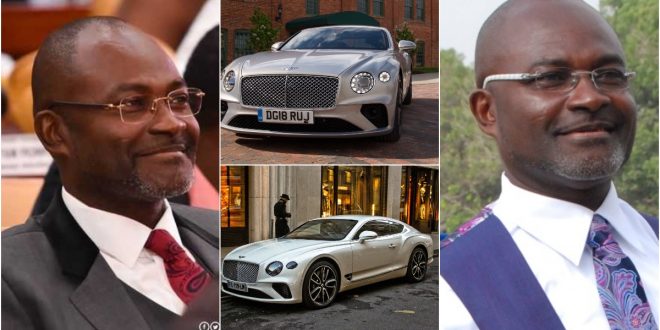 “I am Happy my daughter is suffering life, I bought a Bently with her school fees”- Kennedy Agyapong.

The member of parliament for Assin Central, Hon. Kennedy Agyapong has revealed that one of his daughters who show so much promise when she was young is now a drug and sex addict in the USA.

Speaking in an interview on Oman FM to motivate the young ones to take their lives seriously, the member of parliament revealed that this daughter of his is now a cheap prostitute in the USA who begs men to sleep with her for $3 only.

He said his daughter had the chance to attend one of the best Universities in the world but she dropped out due to drugs.

He revealed that, his daughter first rebelled when she scaled the wall in SHS to sleep with a Nigerian, but she managed to passed her exams of which she got the chance to enroll with California Institute of Architecture.

“What hurts me about this whole thing is that during that semester, I had already paid $42,000 within three weeks into the semester, she said she won’t continue the schooling. When her Chinese roommate went to check on her, she told me my daughter had sniffed several hounds of cocaine. She’s with the whites who sleep with her because of her addiction.”

” I was supposed to have paid $168,000 for the remaining two years in architecture school but with her decision to drop out of the school, I added some money to the money I had set aside to pay her fees and bought a Bentley with it.” he added “I wanted to register the car with the inscription a fools school fees but my wife said I should not do that because the car is an expensive one”. he added.