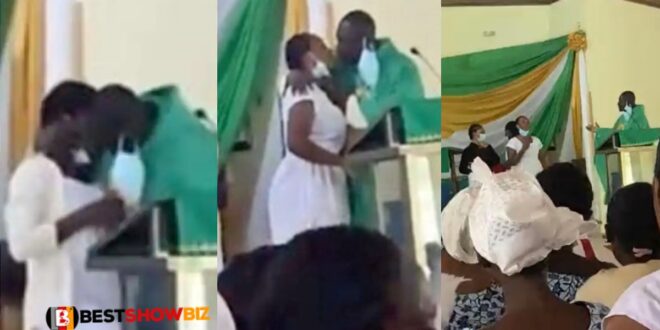 According to accounts, the third girl who was kissed on the lips by the priest in the viral video has been traumatized by the encounter.

One of the kids who received a holy kiss from the priest told Accra-based Starr FM that she is a virgin and feels disgusting following the experience a few days ago.

This was discovered by a St. Monica College of Education student who claimed the third female was imprisoned in her room.

According to the student, Reverend Father Balthazar Obeng Larbi kissed the three Bible readers as a token of thanks for their hard work since level 100.

She informed Starr FM that the third girl kissed in the viral video told her classmates that she was hesitant to let the priest kiss her because she was a virgin.

The student felt enraged and unclean after the Priest kissed her, according to the source, because she believed her virginity had been broken by the immoral act.

“The third girl the father kissed is a virgin and that’s why she gave her cheek to the father to kiss but he forced and kissed her lips. Afterward the incident, she said the father had broken her virginity” – the lady is reported to have said.

Users on social media reacted to the latest revelation by stating the priest should be charged with sexual harassment.