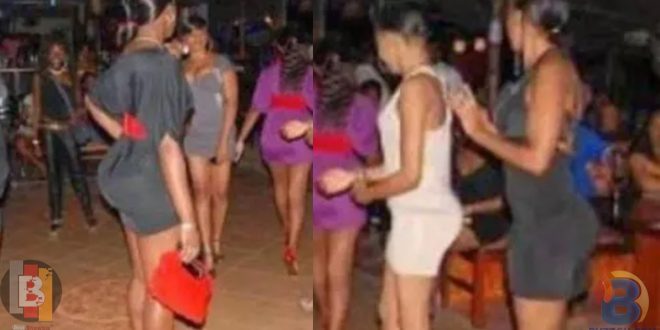 A 38-year-old lady from the Volta Region, whose identity was not revealed, related her experience of having a spouse but being a prostitute.

According to the lady, her grandpa, a fetish priest in the Volta area, slept with her when she was four years old while she was residing with her Auntie.

Her grandfather passed away when she was 11 years old. She wanted to tell her parents about what the man had done to her at the time, but she couldn’t get the courage.

However, following his death, each male the lady meets is required to sleep with her. She began attending clubs with her friends when she was 12 years old, and he slept with men.

That’s when she started prostitution; she generally hangs around at StandChart, which is located across the street from Madina Market. She claims that many prostitutes are envious of themselves.

When she was 20, she met a guy who was interested in her, but she didn’t love him because of the type of work she was doing.

She can’t be with just one man, but she became pregnant. She stated that whenever she goes out for prostitution, she prays to God to protect her and assist her in finding a nice person.

That man counseled her to cease prostitution but she ignored his advice. She married and gave birth to his first kid; subsequently, she became pregnant, but she was living in a kiosk with her husband at the time.

When it rained one day, their kiosk became inundated.   Fortunately, they were saved from the water by a special man.

According to the lady, she never receives her mother’s affection; the mother has passed by where she lives but has never come to see her.

The woman also stated that she is married but still engages in prostitution. One day, a man in a vehicle arrived to pick her up, and they drove to Buduburam.

When she arrived at the man’s house, she was taken aback when he opened his door without closing it. She questioned him why, and he said that armed robbers occasionally came to his house to assault him.

The guy’s chamber had a terrible odor, so he informed her he wanted a human sacrifice.

The lady felt terrified, so she instructed the man to take a wash before they went to bed, and she rushed away. She is now fed up with her lifestyle and wishes to end her prostitution.