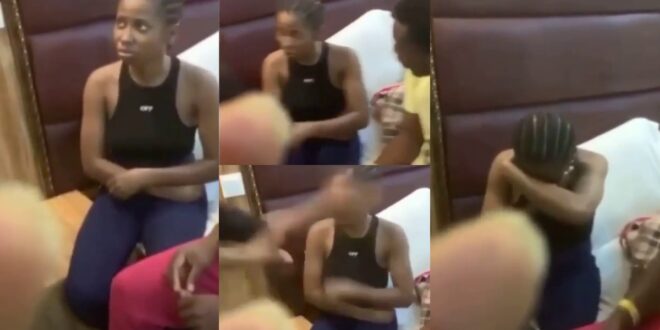 Social media users have condemned a young man’s violent actions after his partner criticized him about cheating on her and he slapped her in front of his peers.
An furious boyfriend slapped his girlfriend after she asked why he cheated on her, according to a video circulating on social media.

In the video, the girl is surrounded by the boy and his friends, who are interrogating her. When she actually says that he cheated on her first, prompting her revenge, the boyfriend gives her a “dirty slap” in front of the other guys in the building.

The kid, who was virtually crying, asked why he was slapping her because he had already cheated on her, and he replied, “Am I not a boy?” I’m supposed to lie, but you’re not.”

Several social media users have called for the guy and his boys to be arrested right away for assaulting the child.

Take a look at the video below to see what I’m talking about.