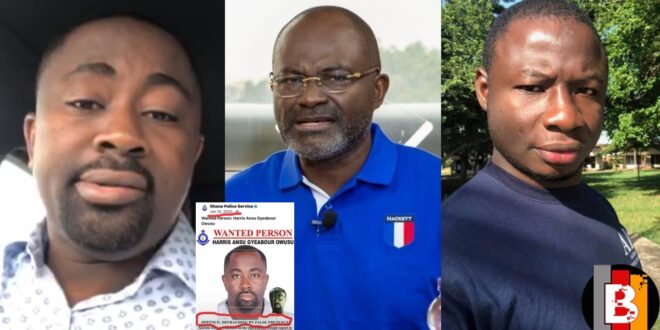 “I am a father of 3 children, I didn’t kill Ahmed Suale”-Ansu Gyeabour reacts to Kennedy Agyapong’s allegations

Ansu Gyeabour, a stalwart member of the New Patriotic Party (NPP), has categorically refuted the claims that he murdered investigative journalist Ahmed Suale.

Kennedy Agyapong, Member of Parliament for Assin Central, accused one Mr Ansu Gyeabour of killing investigative journalist Ahmed Hussein-Suale in a recent interview on Monday, May 24, 2021.

On January 16, 2019, Ahmed Suale, a member of Anas Aremeyaw Anas’ Tiger Eye PI, was assassinated at his Madina home.

According to Kennedy Agyapong, the police updated him about Ahmed Suale’s killer, naming Ansu Gyeabour, an ardent NPP supporter who lives in Kumasi.

Kennedy Agyapong said in an interview with Adinkra TV in New York that he is warned whenever the police aim to make an arrest and then goes into hiding.

Below is a video of Kennedy Agyapong’s interview.

Ansu Gyeabour, in response to Kennedy Agyapong’s accusations and images of him being disseminated as the alleged assassin of Ahmed Suale, declared he could not even murder a fowl, let alone a human being.

“All those who know me know that I can not even kill a fowl,” he said in a video uploaded on Facebook. Suale, Ahmed? he said, “I do not know him.” I am an oil and gas trader. I work in the oil and gas industry as a trader. Because oil and gas is not the tomato that we advertise, I have nothing to do with the media. We do not even promote ourselves. I am not familiar with Ahmed. I have no idea who the f*ck is. “I do not give a damn.”

“My picture is all over the place that I killed [Ahmed Suale].

“What if Ahmed [Hussein-Sualefamily ]’s finds me somewhere and stabs me? What is going to happen? What have you accomplished if that happens? I am the father of three children. this is ridiculous” He inquired.

Ghanaians are “wicked and stupid,” according to Harris Ansu Gyeabour, for believing and celebrating Kennedy Agyapong’s words.

Take a look at the video below to see him in action.