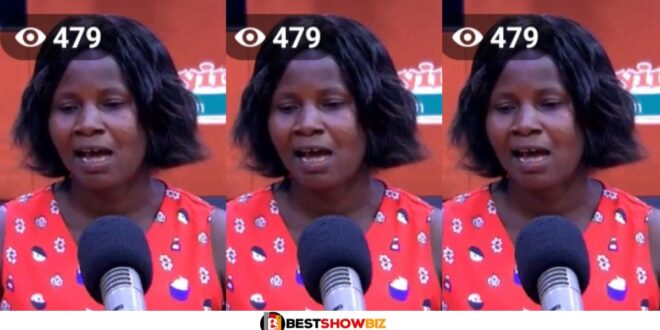 Lydia, a married woman, describes how she slept with another man after a fight with her husband. The woman explained that she married her husband, Kwaku Boakye, years ago, that they had four children, and that they worked hard to buy a car.

They were all living peacefully in the house, but when her husband began dating another woman, she lost patience and went to fight with the side chick.

After a few days, her leg began to swell, and she was taken to the hospital for treatment. Lydia stated that her husband began to doubt her condition, so he confronted his side chick, who revealed to him that she used juju because of how she fought with her.

The side chick then sent her to a fetish priest for assistance, but the fetish priest refused to assist her until she confessed the sin she had committed.

Lydia also admitted that she had a fight with her husband, which caused her to travel to her hometown and stay for four months even though they were not divorced.

At the time, another man proposed to her; she accepted his proposal and slept with him. A month later, her husband came to pick her up and they went to stay together, but she couldn’t tell him because of her shame.

Lydia went on to say that when her husband heard the confession, he became enraged and left the shrine with the side chick, and that the fetish priest also refused to give her any medicine to treat her leg.

Lydia went on to say that it was her mother who cared for her until she recovered and began caring for the children, and it took years for her husband to come back to her, but when she became pregnant with Kwaku again, he asked her to abort the baby.

She did not listen to her husband, so she kept the pregnancy, but the man became enraged and left the house without returning; she worked hard before caring for herself and four children.

The woman is now begging her husband to help her care for their children. According to Kwaku, after marrying his wife, he discovered Lydia was pregnant with another man, but he did not divorce her and remained with her.

Read Also  Video: Stonebwoy was the first to call and send me money when my house got burnt - Beverly Afaglo

While his wife and children were in Obuasi, he went to work on their farm in their village, but his wife did not visit him, which is why he began an affair with a woman.

His wife stopped sleeping with him after learning about his extramarital affairs. But he never imagined his wife would cheat on him, but when she revealed to the shrine that she was sleeping with another man at the time, he lost interest in her.

Kwaku went on to say that he looks after the kids but that his wife does not appreciate his efforts.