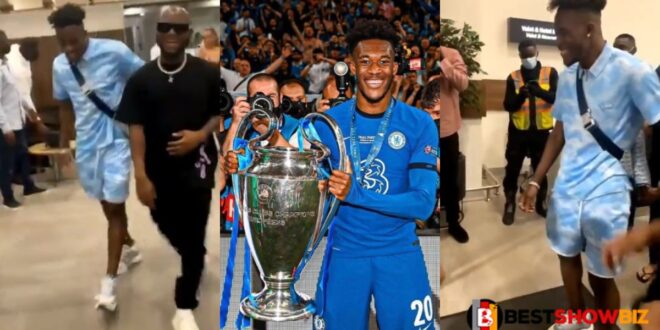 Hudson Odoi of Chelsea comes to Ghana for vacation, hangs out with king promise (video)

Tuchel’s team won the Champions League against Manchester City in Porto, and the gifted winger was a key member of that squad.

Callum is of Ghanaian heritage, although he grew up in England and has strong attachments to the country.

The young footballer was fiddling with his phone as King Promise threw the camera angle on him and asked him to recite a few phrases in twi in a video that has gone viral.

The season has come to a triumphant conclusion, and players are now on vacation to spend time with their close friends that they never had time for during the hectic season that just concluded.

It is unclear how long he will be in Ghana, but based on the videos captured, he appears to be enjoying himself.