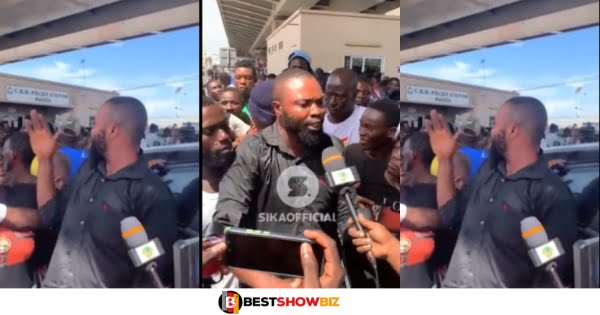 In Kasoa, two Nigerians were detained for kidnapping a 5-year-old boy.

Two Nigerian boys have been detained for kidnapping a 5-year-old boy in Kasoa, Ghana’s Central Region.

The youngster was walking with his mother near the Kasoa flyover when these people in a car pulled up alongside them and whisked him away.

They did a fast U-turn, but the mother screamed an alert, drawing other pedestrians’ attention.

Due to the heavy traffic, they were unable to drive quickly, allowing a Good Samaritan to reach them.

They began begging as soon as their car door was opened.

According to the man, he attempted to warn the police controlling traffic to assist him, but they ignored him, leaving him to face all three alone.

Read Also  Black Sherif is making it big after his images are spotted on billboards in Nigeria (video).

Fortunately, two of the men who attempted to flee the automobile were captured, but the car’s driver managed to get away.

The Good Samaritan who assisted the mother in reclaiming her son narrated.