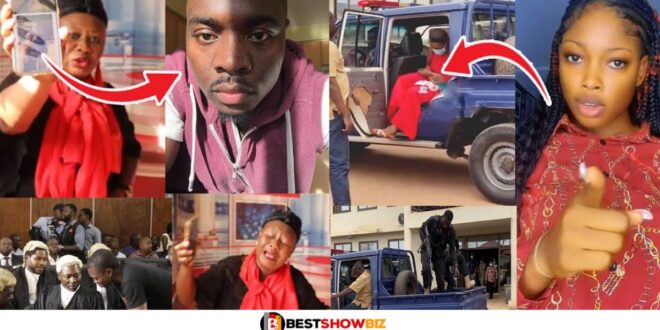 “How and why I killed my Canadian boyfriend,” Lady suspect says in court, revealing the details of the crime. (watch video)

The Canadian borga who was reportedly slain by a level 100 student model named Safina Diamond had his circumstances surrounding his death clearly described in court by the prosecutor.

Safina Diamond was accused of the killing.

Michael Fiifi Ampofo Arku, a Technical Officer, is said to have provided assistance to Safina Mohammed Adizatu, who is 23 years old, in the commiting of the crime, according to the authorities.

The authorities claim that the person who passed away, identified as Frank Kofi Osei, was a Ghanaian national who held a Canadian residency and was vacationing in the country at the time of his death.

The deceased reportedly suffered multiple stab wounds to the chin, jaw, and back before being strangled to death by Safina, who is also known as Safina Diamond on social media. Arku is said to have participated in the attack.

When the two appeared in court in Adenta, they were charged with murder as well as conspiracy to commit murder.

According to the case presented by the prosecution, which was developed by Chief Inspector Jacob Nyarko, Osei, who is dead, paid a visit to Safina, his fiancee, who resides at Ashalley Botwe School Junction on Sunday, July 24, 2022, and made the decision to spend the night there. This was stated in the case.

The prosecution contends that Osei was fatally strangled after being repeatedly stabbed with a knife on his chin, jaw, and back during the early hours of the morning by Safina, Arku, and other unknown individuals who were involved in the crime.

The prosecution asserts that Osei’s attackers were Safina, Arku, and other unknown individuals who were involved in the crime.

According to the Chief Inspector, Safina and Arku cleaned up the blood after the body had been in the room for an entire day before they discovered it.

According to the prosecution’s theory, the accused later transported the deceased person from the first level of the multi-story structure down the staircase, dumped him at the gate of the home where the deceased person had parked his Toyota Tundra, and then cleaned the blood stains off the stairwell.

On the morning of Tuesday, July 26, at four in the morning, Safina called a police officer to say that her boyfriend had just recently visited her and had passed away while he was sleeping in her bed.

The prosecution claims that the police officer notified the Police Patrol Team, who rushed to the location in a hurry and found the deceased person’s body laying at Safina’s front gate. This information was provided by the prosecution.

Safina and Arku, on the other hand, could not be found anywhere when the police arrived but were later arrested.