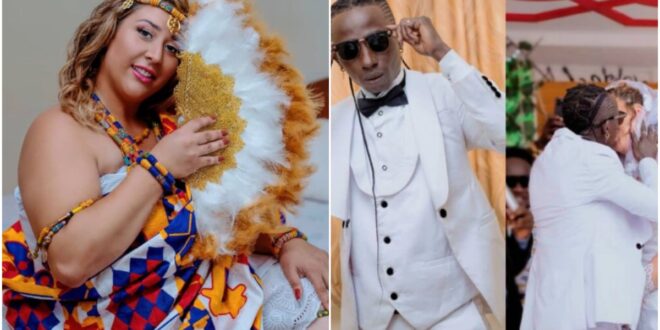 Here is Bedroom video from Patapaa and His Wife, Liha’s Honeymoon

Popular Ghanaian musician Patapaa over the weekend surprised Ghanaians as he finally tied the knot with his Obroni girlfriend Liha Miller in a beautifully traditional and white wedding ceremony.

the new couple in town has begun their marital journey and all the enjoyment it comes with it as a video from their honeymoon surfaces.

during an exclusive interview with Adom TV’s Sister Sandy on a live video, Patapaa and Liha were seen in the bedroom of the hotel they are enjoying themselves.

Liha during the interview disclosed how she met her husband, Patapaa, and why she chose him among all men.

the American born lady revealed that she has not met a caring and romantic man like her husband in her life before.

She also disclosed that her husband Patapaa brought the idea that they should finally marry and their marriage would have come off last year but plans didn’t go well because of Covid-19.

while Liha was talking Patapaa was seen hiding the camera while he lies on the bed.

below is the video watch;