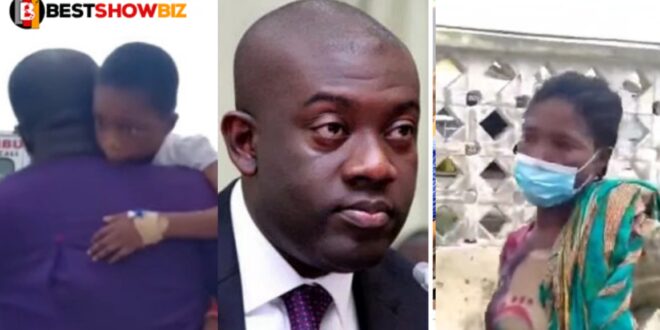 The Hon. Kojo Oppong Nkrumah, MP for Ofoase Ayirebi Constituency and Minister of Information, has paid in full for a youngster who has gone blind to receive quality medical care.

The 8-year-old Mariam was carried to the Koforidua Central Hospital by her mother, Regina Sefa, but she was refused treatment because she owed GHS 1800. They again refused her discharge. She went untreated for a week in the hospital.

Lord Wiredu, the child’s instructor, first sponsored the medication, but he ran out of funds. Due to a lack of medication, the little youngster developed meningitis and went blind. Chief Jerry Forson requested help for the wife and her child on AdomFm “Dwaso Nsem”

Hon. Kojo Oppong Nkrumah promised to entirely pay for the child’s medical bills. Chief Jerry Forson traveled to Koforidua to pay their costs and transfer the youngster to Accra’s Korle Bu Teaching Hospital. The mother said she had been raising the child alone for almost five years since she had no idea where her father was.