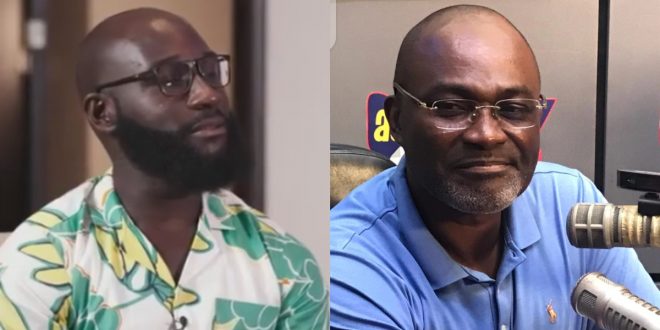 Hon. Kennedy Agyapong Made The Police Charge His Son For Breaking Traffic Rules

The son of the Hon. Kennedy Agyapong, Kenneth Takyi Agyapong has revealed that his father’s strictness does not just end in the public but is also exercised at home.

according to Kenneth in an interview on the ‘Dentaa Show’, the outspoken Member of Parliament encouraged police to charge him some time ago for disregarding traffic rules.

Kenneth explained that he was once pulled over by the police for disregarding rules so he decided to call his father Kennedy Agyapong to step in on his behalf.

He added that when he called his father, he ordered him to put it on load speaker and to his surprise, his father(Kennedy Agyapong) told the police to charge him(Kenneth) of any damages. He claimed he was fined $500 before being freed.

Kenneth Takyi Agyapong is currently the manager of Kencity Media a media establishment of his father Kennedy Agypong.