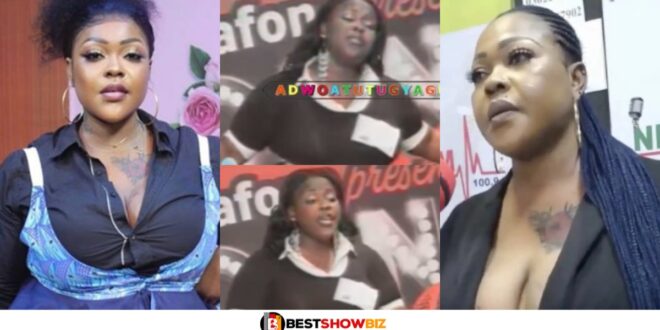 Mona Gucci, a Ghanaian television personality known in private as Abigail Semeha, has a talent for singing and once auditioned for a reality show.

It turns out that the Onua TV host auditioned for Vodafone Icons, one of the music talent hunt reality shows that aired in the 2010s.

A video of Mona Gucci’s audition has gone viral. Mona Gucci appears in the video wearing a black dress with white trims. She performed Alicia Keys’ No One and appears to have done her best with the vocals, but she was dismissed.

Mona Gucci had granted an audition interview prior to her session. She introduced herself as Abigail and proceeded to brag about her swag.

Instagram blogger @adwoatutugyagu who first shared the video indicated that the Onua TV presenter partook in the show 12 years ago.

“12 years ago when SP went to Vodafone Icons auditions, she got bounced tho.. She then decided to be a TV presenter Let me leave this one here to calm my nerves as my page has been restored again.. I’ll be back ,” the caption to the video read.