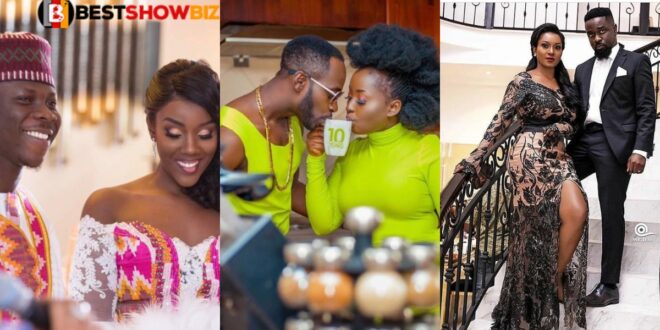 Many people in Ghana respect famous couples in the entertainment sector because they are devoted and devoted in their relationships.

Celebrities such as Okyeame Kwame, Stonebwoy, and Nana Ama Mcbrown are known for displaying their love life on social media, demonstrating how happy and content they are by choosing the proper partners.

It is fascinating to notice that certain people have become overnight celebrities just because they are romantically linked with some of Ghana’s most powerful persons.

These individuals now have a sizable social media following and a great deal of societal clout.

The following five beautiful females have become well-known in Ghana as a consequence of their romantic relationships with some of the country’s biggest personalities.

Tracey Ama, as she is known in real life, is the wife of Sarkodie, Africa’s most decorated rapper and two-time BET Award winner.

Sarkodie and she dated for ten years before marrying in 2018. Titi, their daughter, was born to them.

Tracey is so well-known in Ghana that she has over 261,000 Instagram followers.

Shatta Michy was previously known as Shatta Michy and was engaged to Shatta Wale, Ghana’s most prominent dancehall musician and Infinix Mobile ambassador.

When the two lovebirds accused each other of being abusive, their relationship came to an abrupt end.

Mrs Okyeame is her given name because she is married to Okyeame Kwame, a renowned Ghanaian Hip Life artist.

According to their social media posts, Okyeame Kwame and Annica have one of Ghana’s happiest celebrity marriages. They have been married for almost nine years and have two children, a boy and a girl.

Annica has a large following on social media, having over 105,000 Instagram followers.

She is a dentist and the wife of Stonebwoy, Ghana’s most famous worldwide dancehall artist.

When she married the BET Award winner in 2017, she became a household name in Ghana. They have two children, a girl and a newborn boy, from their marriage.

Dr Louisa allegedly encouraged Stonebwoy to fire his long-time buddy and manager, Black Cedi, as well as his mentee, Kelvyn Boy, from his record company in 2019.

She is just 23 years old and is well-known in Ghana for marrying Kennedy Osei, the first son of Osei Kwame Despite, a multimillionaire media magnate, in February 2020.

Her wedding to Kennedy was dubbed the “Royal Wedding,” and it went down in Ghanaian history as one of the most costly weddings ever.

Tracy gained a sizable social media following after the wedding, with over 87,000 followers on her verified Instagram account.