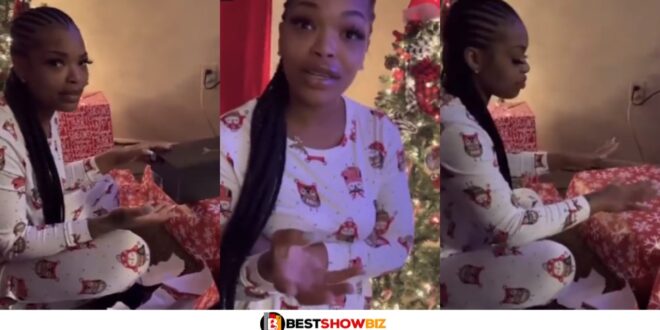 “He wrapped my things like a Christmas gift, and kicked me out at midnight”- Lady reveals what happened after cheating.

After discovering that his fiancée had been cheating on him with her bestie, he carefully kicked her out of his house around midnight on Christmas Day.

The man packed the girlfriend’s luggage like a Christmas present as though they were traveling and made her feel he had given her something for the holiday season.

After the girlfriend unwrapped the box and saw her belongings inside, her face was filled with a puzzled expression.

The boyfriend then informed her she should pack her belongings and leave since he discovered she was having an affair with her best friend, Zoe.

The girl in the video appeared to be clueless about what he was talking about at first, but subsequently acknowledged knowing who the Zoe person was.

She did, however, mention that the Zoe man is a coworker whom her boyfriend knows is simply a bestie to her, and the boyfriend stated that whether they are coworkers or not, she is having an affair.

The boyfriend urged her to collect her belongings and leave the house.