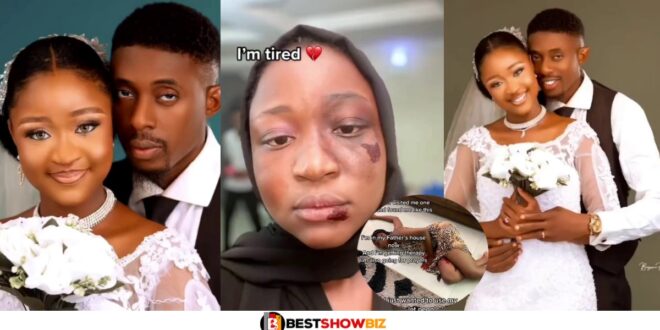 A young lady, probably between the ages of 20 and 30, has filmed herself telling her followers how her happy marriage ended in tears.

When she and her boyfriend were courting, she said he was extremely caring and loving. He revealed his true character to her after they married, and she regretted marrying such a wicked man.

The young lady claimed that everything went wrong after she became pregnant. When they have a problem as a couple, her husband chooses to use beatings instead of talking.

These savage beatings continued until she collapsed. The lady claimed that her sister paid her a visit one day and discovered her lying in a pool of blood. It was because of that that she lost her baby. After noticing that she is bleeding, he beats her and abandons her to die.

Her sister allegedly took her to the hospital, and by the grace of God, she survived her husband’s abuse. She did everything she could to protect her marriage, but she is now exhausted.

She is now living with her father and will never return to her husband’s home. If she does not make this choice, her wicked husband will murder her one day.

She took advantage of the opportunity to warn young ladies that not everything that glitters is gold.

Read Also  "Let's pray for Moesha, a businessman has used her for ritual"- Adu Safowaa