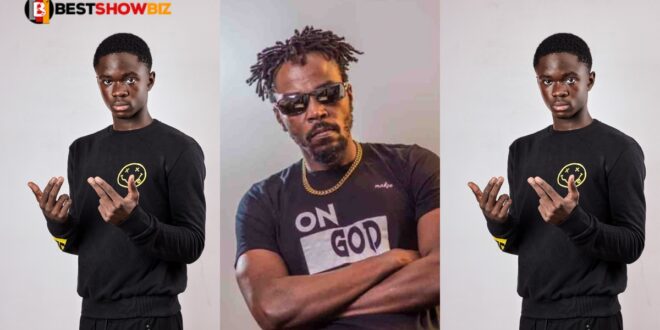 Yaw Tog, a 17-year-old Ghanaian rapper, is not taking a holiday in July.

He had been under fire all week for an interview in which he claimed that the remix of Sore made UK rapper Stormzy more popular in Ghana.

Just when we thought he was getting a respite, the young high school student was attacked once more.

Yaw Tog is being chastised for starring in a music video with Kwaw Kese in which all of the video vixens were naked.

Netizens believe he is too young for such music videos, which they believe may harm his morality.

Below Are Some Of The Reactions To The Video:

Blessing Fosu
For Christ sake. This boy is still a teenager.
Some of you saying he is chasing his dreams.
Which better dream will come out of this.

Kwesi Dunya Aduamoah
This is not good for a boy in secondary school.

Nana Kwasi Boadi
This boy dnt have a good management, if his manager can alow him to shots such video at his age then, this young boy dnt hav a better future.

Yhaw Wheezy
Kwaw Kese Stop fooling..So Musicians can’t shoot a video with ladies dressed modestly…Kwaw Kese As I said earlier, Stop fooling..Dont spoil the small boy..
Yaw Tog you are in your final year, instead of you to focus on your books before pursuing your music career, You dey shoot bum bum video..Kwaw Kese Gyae Gyimi nu

Bestcaps GH
Kwaw, you dey spoil the young boy oooo.
Yaw Tog should learn, too explicit for your brand.

Nana Kweku Gooner
Kwaw Kese your foolishness is going beyond measure,what will Yaw Torg actually bring to you marketably that you should start featuring him in your nuisance like this…Taking him up or bringing the poor boy down?