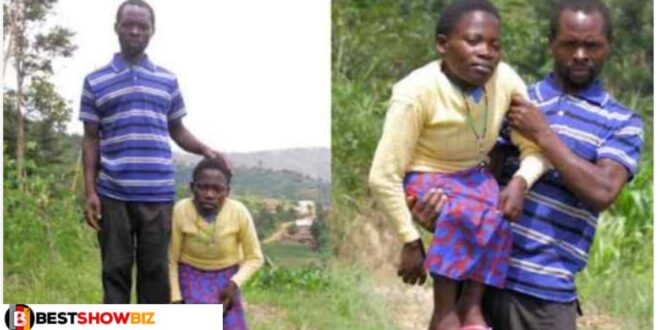 “he is my boyfriend, not my father”- Short lady discloses after people mistook her man for her dad

A woman whose small stature has earned her a lot of ridicule from those around her, including her own father, has finally found the love of her life, and she couldn’t be happier.

Because of her short stature, Uwiriyingiyimana Odeth, 26 years old, has been bullied by other children, who have referred to her as a dwarf. The most vicious of the bullies is her own father, who has told her that she will never find a man who will marry her.

Odeth was born in 1995, according to a publication sighted on CoorectNG, but her father refused to send her to school because he had lost faith in her. Every day, he would barricade her in a small room.

In order for him to stop molesting the lady, the local authorities had to intervene. However, he still harbors ill will toward her. Fortunately, she was enrolled in a vocational school where she learned to weave thanks to the kindness of strangers. She was given a weaving machine, which she put to use in order to make some money for herself.

She could make beautiful dresses with the machine, and she could use the money she earned to provide for herself, her mother, and her other siblings, since her father had abandoned her and her mother and siblings.

She has now turned to the public for assistance in obtaining a new machine, as the one she had been using to do her work has become beyond repair.

Another interesting development is that a man identified as Dushirimana Celestin has fallen in love with her and intends to marry her despite her short stature.

Take a look at the video below, which was posted by Afrimax TV.