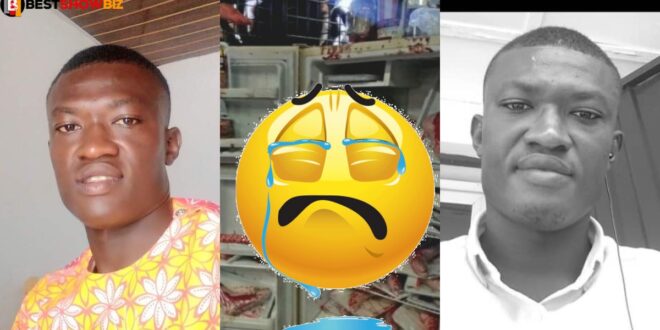 “He is a quiet innocent man in this area, you won’t suspect he is a killer”- neighbor speak after Richard’s arrest (video)

The people of Sunyani, the Bono Region’s capital, have voiced their amazement at the arrest of a serial killer.

Richard Appiah, 28, was identified as a serial murderer on Friday night after his missing sibling was discovered dead in a structure near his home.

Despite the fact that he was last seen with him before going missing, He denied knowing the kid’s location before being discovered in the room.

The area boys and his mother’s alertness led them to find his lost brother in a room at his house, as well as other missing children in a refrigerator.

The Sunyani was taken aback by this finding, as they had not expected Richard Appiah to be so evil.

Richard Appiah, according to some residents who spoke with Ark Fm reporters, is a reserved man who rarely speaks to strangers.

according to a NADMO worker whose missing child was also found dead in the refrigerator, Richard came to his house on Friday morning for profits from a land he sold for him, not knowing he was the one who kidnapped his 15-year-old son last week, .