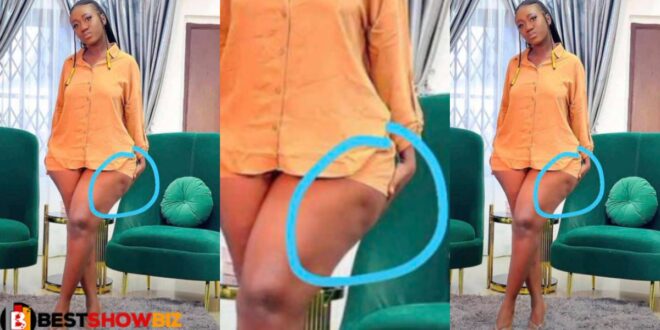 Hajia Bintu, a Ghanaian Tik Tok star, was not pleased when a photo of her appeared on Twitter, implying that she had undergone liposuction.

Hajia Bintu became famous after her Tik Tok videos went viral. She is usually seen shaking her bum, flaunting her hips, or showcasing how well-endowed she is in most of these videos.

As a result, many people have come to recognize and admire her for having a well-endowed physique that is free of surgical augmentation. Her hips and bums are widely thought to be natural.

Hajia Bintu took offense when @ mmokob3 shared a photo that appeared to show her having undergone surgery to improve the shape of her bum or to enhance the pelvic section of her lower body.

However, most curvy women have cellulite, which is extra flesh or dotted skin that is typically found around the hips, buttocks, and thighs.

Cellulite is dimpled-looking skin that is most commonly found on the thighs. It develops when deep within the skin, fatty tissue pushes up against connective tissue. Cellulite affects more than 85 percent of women aged 21 and up.

Even though cellulite can be surgically removed, most women, like Hajia Bintu, prefer to keep it.

In the absence of that information, Hajia Bintu reacted angrily by condemning the photograph. Hajia Bintu stated that no one can drag her down, therefore releasing a photo like this to smear her reputation and imply that she has had liposuction will not wash.

We live in a country where people don’t educate themselves all they know is to buy Data to pull people down smh. We need to change our mentality.