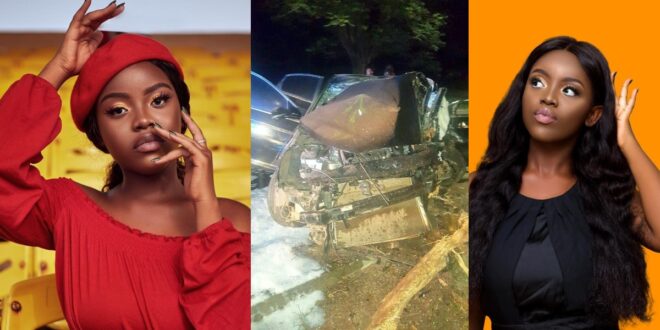 Gyakie, a singer, is mourning the loss of two of her close colleagues, Brown and TIA, who were among the KNUST students who died recently.

On Saturday, March 27, 2021, three students from the Kwame Nkrumah University of Science and Technology (KNUST) died in two separate incidents at the hospital.

On JoyNews Prime, University Relations Officer of the KNUST, Dr. Daniel Norris Bekoe, reported the incident, saying the first incident happened at 3 a.m. when a car carrying five students crashed into a tree.

Two of the students died on the spot, while the third is in serious condition. The remaining two are undergoing care at the Komfo Anokye Teaching Hospital and are in stable condition.

While the cause of the crash is unknown, the University Relations Officer stated that police are investigating the incident.

In the other incident on campus, a student dropped down at Unity Hall by accident.

According to sources, the student was on his way to see a friend when he slipped, fell down the first-floor stairs, and smashed his head against the wall. He was taken to the hospital, where he passed away.

Brown and TIA are two of Gyakie’s mates who are among the three students. According to records, TIA and his best mate, Brown, were killed in a car accident inside KNUST.

The singer has paid tribute to her friend on Facebook. She expressed herself as follows: