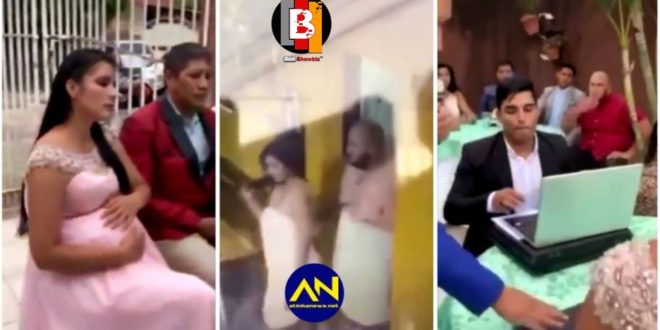 A video is trending online and it captures the moment a bride had the shock and embarrassment of her life after the groom exposed her on their special day.

In the video which was first shared on Twitter, the groom exposed his bride on what looked like their wedding day in the presence of some family members and the guy the lady was allegedly having affairs with.

He had his lawyer present who was ready to present everyone with solid evidence to support his claims.

According to a description of the video, the man initially thought his spouse was 4 months pregnant for him but he got to know she has been with a child for 6 months with another guy. He proved this presented medical evidence that he isn’t the baby’s biological father.

The groom proceeded to show everyone footage of the lovers engaging in the affair. Eventually, all the attendees started assaulting the other guy cheating with the bride.