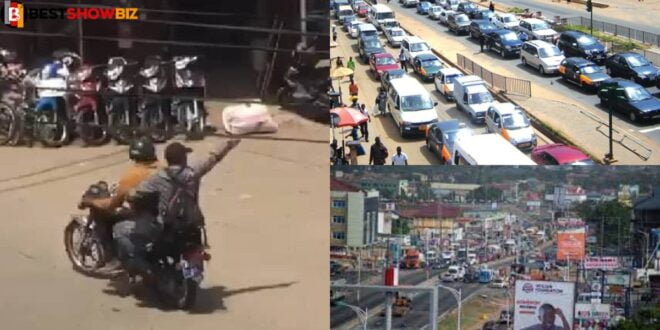 The Ghana Police Service has apprehended a member of the armed gang responsible for last week’s robbery attacks in the Greater Accra Region.

Four robberies in broad daylight were reported in separate parts of the capital. The robbers opened fire in one instance, leaving a witness with gunshot wounds.

The robbers got off with large quantities of money in each event.

Acting Police Public Affairs Director, ACP Kwasi Ofori, told JoyNews’ Newsfile on Saturday that they are in the process of determining the identity of the rest of the group.

He stated that his organization has put up an “eagle eye” on the gang and is progressively closing up on the criminals in order to ensure security in the capital.

“Their [robbers’] methods have been thoroughly ingrained in our intelligence system, and we are employing all available means to apprehend them.

“We’ve also distributed dossiers on them to our operational teams to ensure that we get them, and we’re coordinating these operations at all levels, from national to regional to divisional, and we can see that it’s working very well.

“We have made an arrest in one of the robbery cases, and that person is currently being interrogated. He told host Samson Lardy Anyenini, “In the coming days, might tell us what we’re going to do.”

ACP Ofori also stated that the police had re-evaluated their operational techniques in order to increase visibility in Accra’s economic centers.

“The possibility of large-scale deployment in strategic areas, including economic areas, is being considered. We’ll also make sure to beef up our intelligence work, patrols, and targeting of these criminals to ensure that we catch them,” he said.