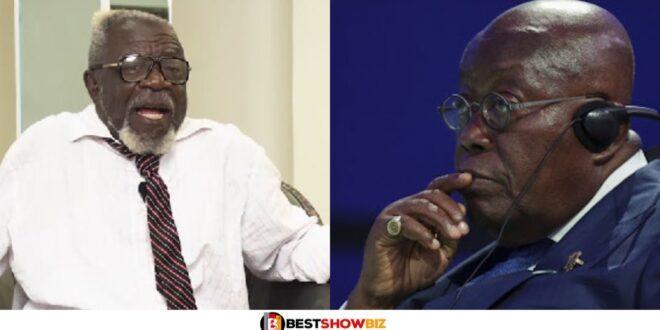 According to the old actor who criticizes the Akufo Addo-led NPP government, Nana Addo’s supporters are behind the country’s suffering and economic problems.

Because they knew Nana Addo was incompetent, they influenced Ghanaians to vote for him for personal benefit and party loyalty.

In an interview on Ghana TV, he said those who supported the ruling administration caused Ghanaians unspeakable hardship and should be sent into Hell.

“I don’t know who ever thought Nana Addo that quotation from the Bible which he succeeded in deceiving Ghanaians while he (Akufo-Addo) wasn’t a Christian. All he got was to be on the seat for four years. He even didn’t deserve to rule us but mistakenly it happened”

“Instead of you (Rev Owusu Bempah) leaving him to go after the four years, you went ahead making prophecies that, “4 more for Nana”

“All the hardship we are currently experiencing is because of 4 more 4 Nana. And to those who said 4 more 4 Nana should God come today for his judgment anyone who opened his mouth and endorsed 4 more 4Nana should be judged and thrown into hell. Look at how just 4 more 4 Nana has made us suffer”,

Read Also  'Forget about my voice, I've got swag and flair' - Hajia4real to her critics