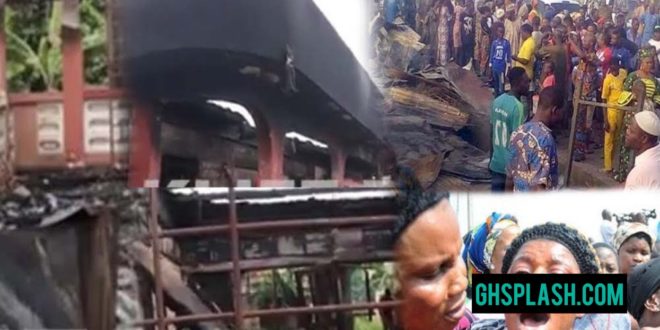 Reports emerged yesterday that four children were burnt to death at Fise, a town near Amasaman in Greater Accra Region on Wednesday, 28th October 2020, after their mother left them to attend church.

The children, aged 7,8,12, and 15 were left asleep while their mother, name given as Prophetess Adelaide Nkrumah attended an all-night service.

well, the mother of these kids who happens to be a woman of God has for the first time spoken.

she denied allegations that she locked her four kids and left to church while they were asleep.

she revealed that her eldest child told her she will get the rest of the kids ready and join them in the church while she and her last child take the lead.

she said; “In fact, when we got to the scene the people around said they heard the cry of the children and when they got closer they saw the smoke but when they called us the fire had gotten out of hand,”

she further added that it’s by God’s grace she took along her 5th child so she can survive.