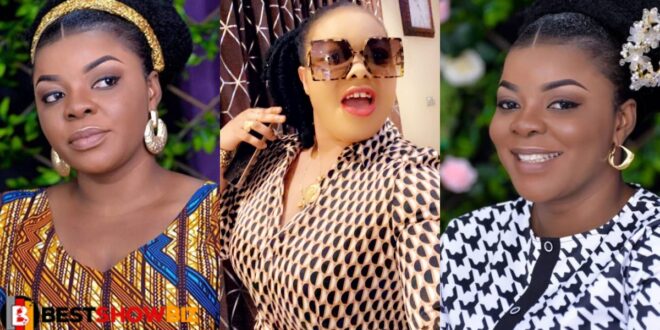 Gloria Kani, an actress turned missionary, confronts Nana Agradaa, a fetish priestess turned preacher, for assaulting her, her children, and her husband.

Nana Agradaa has been criticizing Kani Gloria for the last few days, according to Kani Gloria, on a topic she spoke about using a bible passage that Nana Agradaa claims she was referring to her.

Kani said in a lengthy video on Instagram that Nana Agradaa had stolen an old sermon she gave and claimed it applied to her, so she attacked Kani as well.

She said in the same video that since Agradaa became a so-called “woman of God,” she has refused to change and continues to behave as he did before she became a preacher.

She said that despite her best efforts, Agradaa has been assaulting her, her husband, and her children.

Agradaa brazenly insulted Kani’s child by saying it was not her husband’s. Despite the fact that Agradaa stated Gloria Kani’s husband was going for a DNA test to verify the paternity of the child, she remained silent and said nothing.

Gloria, on the other hand, has had enough of Nana Agradaa’s allegations and has decided to give her a taste of her own medicine.

She also claimed that Agradaa is a con artist who preys on others for profit, but that she earned all of her money legally.