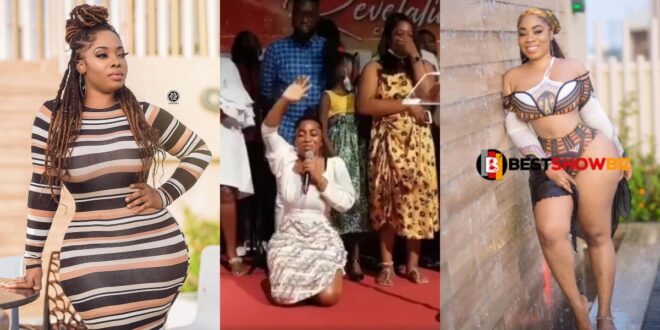 The shocking remorse of Ghanaian Instagram celebrity Moesha Boduong has still not faded from many Ghanaians’ thoughts.

Moesha needs no introduction when it comes to the top tier of slaying queens in the country because she is well-known for what she does for a living.

The stunning woman, who drew a lot of attention to her heavy behind and hips, admitted to sleeping with married guys as a source of income on multiple occasions.

She only gave her life to Christ a few hours earlier and vowed not to live the same wayward life she had been living. She changed her name from Moesha to Morisha.

However, a viral video of her crying out loud as if she were lost in a terrible jungle and eventually found is not enough to persuade everyone that she has truly turned a new leaf.

As a result, one Twitter user, @worldbrain1, has urged her to donate all of the money she earned as a slaying queen to charity to demonstrate her dedication to the repentance cause.