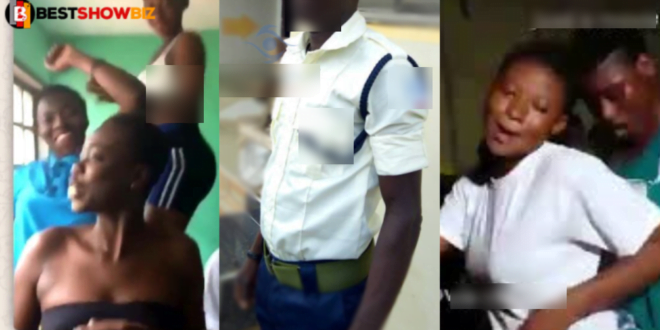 A student was dismissed from Mabelreign Girls High after a sex scandal. The guard, David Tembo, estimated to be in his late thirties, allegedly quit in an attempt to cover up the affair.

A 16-year-old Form Three student was recently expelled from Mabelreign Girls High School after having many s.e.xual encounters on school grounds with a security guard hired by the school.

Tembo, on the other hand, is said to be still residing at the school, but the Form three girl was expelled, leaving her parents unhappy.

According to H-Metro, the problem was downplayed at the police station because the girl stated that the encounters were voluntary. The girl’s mother told H-Metro that her daughter had sexual encounters with security guard Tembo. She stated:

Read Also  Sad News hits Akuapem Poloo as she loses the man who took care of her when she was young.

I don’t want to talk about it any longer since it’s upsetting my kid. She can’t even deal with anything right now. Nomatamsanqa Kusena, the school’s principal, was accused by the father of shielding the security guard. He stated:

The Headmistress is shielding someone who tricked my daughter into having s.e.x. Nothing has been done to him, and the head simply wishes for us to leave.

We commit our children to the security guard at school, and he is supposed to be a father figure. How could he do such a thing to my daughter?

The unfortunate aspect is that we were recently given a transfer letter and urged to look for another school for my daughter because the one she is now attending is no longer accommodating for her. Tembo, when reached for remark, denied ever having an affair with the Form Three student. Tembo stated:

I’m not sure what you’re talking about; yeah, I know her, but the interactions you’re referring to involve another guy. My phone was used to send the texts, and I was also fixing her phone.

Mrs Kusena, the principal, can testify because I explained everything to her. Meanwhile, Kusena declined to meet with the media, saying, “I am not in a position to speak to the media; I can only send you to the authorities.” “I have no comment.”