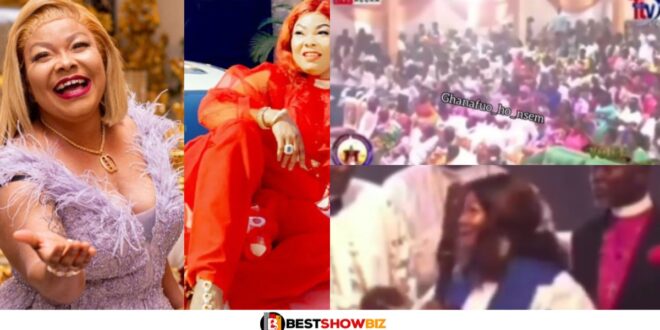 Yesterday was the ordination ceremony, and it took place at the unveiling of her ultra-modern church edifice, which has a price tag of several million cedis.

During the course of the ceremony, Nana Agradaa used the opportunity to make an emotional plea for forgiveness to all of the individuals whose feelings she had hurt, whether intentionally or unintentionally.

Nana Agradaa believes that all of the wrongs that she has done should be buried because she did not know Christ during that time; nevertheless, she is no longer a worldly person; as a result, she should be granted a second opportunity.

Read Also  Yawa: Medikal steals microphone to his house from the show he was performing at.

Nana Agradaa was making an indirect appeal to the forgiveness of her sika gari victims, who had taken to the streets the previous week to demand that justice be served.

She is well aware that what she did to them was immoral and extremely treacherous, yet she did it nevertheless because she was greedy and knows that greed always wins out over morality.

Read Also  Ebenezer Tetteh was motivated by a stranger to start his own Ice cream business, he Now uses the business to Pay his school fees