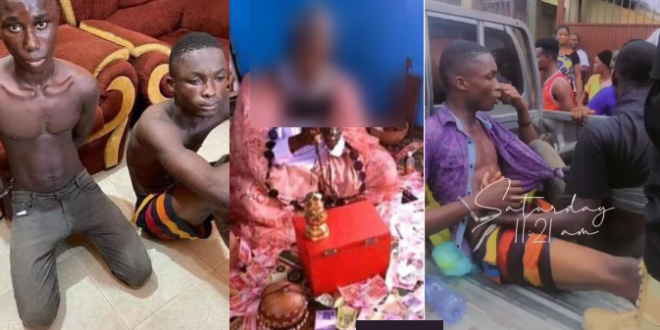 Ghanaians call for the ban of mallams on TV after two teen boys k!lled a child in Kasoa

Following the horrific murder of 11-year-old Ishamel in Kasoa by Felix Nyarko and Nicholas Kini, both aged 16, Ghanaians have voiced outrage about radio and television stations that advertise mallams and juju men.

Calls for a ban on mallams and juju men being granted airtime to market themselves on television and radio have resurfaced in the aftermath of the Kasoa murder.

Many people are baffled as to what may have inspired the teens to commit such an act.

Many on social media believe that the precedent set by these young teens is due to the various commercials made by these money ritualists and mallams on radio and television stations.

According to one social media user, they make it sound too easy, which helps to attract young men into being scam victims.

“This is what happens as our misleaders stand by and watch vices develop into routines.

TV stations broadcast a variety of programs that encourage individuals to become wealthy through rituals. Why won’t the youth indulge in such behavior? Godwin Dankwa said, “The government must wake up from its slumber.”

“This is what happens when our misleaders look on unconcerned for vices to become habits.TV stations show all sorts of things that induce people to get rich through rituals. Why won’t d young ones resort to such practices? D govt must wake up from its slumber,” Godwin Dankwa wrote.

“We have to blame this TV station showing money rituals every day and night
They are influencing a lot of people
The government should shut down all those TV stations,” Kofi Jet Ansah wrote.

“I don’t even know why
Up till now, the government is not saying anything about those tv stations bringing mallams and lotto forecasters to the set,” Paa Kwesi Affal commented.