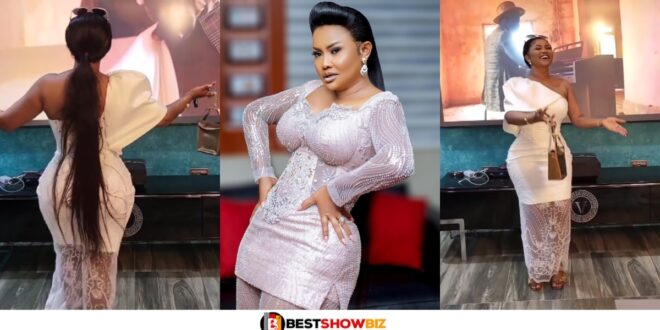 After acknowledging that she has, in fact, operated on her body, actress Nana Ama McBrown is facing criticism once more for her appearance.

During a recent mentorship program, in which she was the source of inspiration for a gathering, she revealed.

Nana Ama McBrown came right out and said that she had liposuction surgery done. Her justification is that at some time in one’s life, the human body will require maintenance of some kind.

It is perfectly acceptable, in her opinion, to spend money on oneself in order to improve one’s appearance if one is well off financially.

Read Also  Why hide their face? - Fans asks Nadia Buari as she drops new photos of her daughters

However, after McBrown’s admission, people appear to be very disappointed that McBrown lied about getting liposuction while it was being shown live on TV.

After making her return to the United Showbiz show, Nana Ama McBrown stated that she had undergone therapy on her hand for the third time.

In point of fact, prior to her homecoming, Fadda Dickson and delegates from UTV invaded her house in order to pray for her and plead for a rapid recovery on her behalf.

On the other hand, they never highlighted the fact that Nana Ama McBrown quit the show in order to have plastic surgery.

Despite the fact that she has now confessed, users of social media are criticizing her for lying to Ghanaians to the extent that she did.

Check out the video and the comments that are posted underneath it.