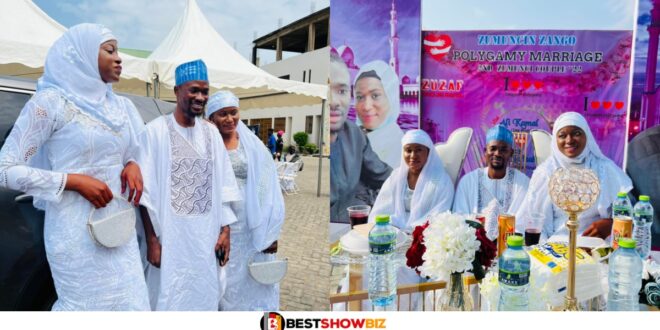 A Ghanaian mining engineer has generated a major sensation on the internet after marrying two women on the same day in a very colorful wedding ceremony.

The ceremony took place on the same day, and both weddings took place simultaneously.

Before he officially wed his two childhood sweethearts, the man who practices polygamy and goes by the Facebook handle “Ing Protocol” has spent some time advocating for the value and utility of the practice.

According to him, polygamy makes women more obedient in marriages because they are aware that there are other options available to them, and as a result, they are less likely to provoke or generate havoc in the home where they are married.

Read Also  I Came Back To Ghana With Only GHS1.50p To Start Life – Sam George Recounts His Sad Story

A significant number of Ghanaians on the internet have used the space provided for comments on photographs that are now trending to express their admiration and gratitude to Ing Protocol for demonstrating that he is the kind of person that he claims to be.

Have a look at some of the images from wedding below.