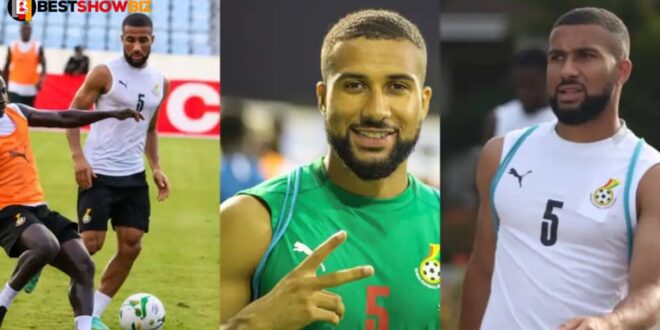 Ghanaian ladies found a new crush in the Black star team, Daniel Kofi-Kyereh is now the ladies man after KPB and agogo.

The St Pauli striker has made several Ghanaian fans despite the short notice.

Born born to a Ghanaian father and a German mother.

Coach Charles Kwablan Akonnor called up the striker for the first time.

Female Twitter users reacted to 3Sports and sports pictures tweets, with some claiming to have found their new crush.

Daniel Kofi-Kyereh will now have new fans who will watch Black Stars games.

He said, “Have to start watching our matches,”

Despite the late call-up from Ghana’s coach, the Saint Pauli attacker is expected to feature against Ethiopia on Friday.

On Instagram, Kyereh commented, “I am very proud and honored to be part of the national team,”

The Black Stars begin their 2022 World Cup qualifying campaign tonight in Cape Coast and then head to South Africa.

Due to Bundesliga travel restrictions, Kofi-Kyereh will not be traveling to Johannesburg.

The 25-year-old has one goal and three assists in five appearances in Germany.

Ghana, he says, must start well if it hopes to return to the global showpiece after missing Russia 2018.

Ayew informed the media following the team’s last session in Cape Coast that the team was combat-ready for Ethiopia’s Walias.