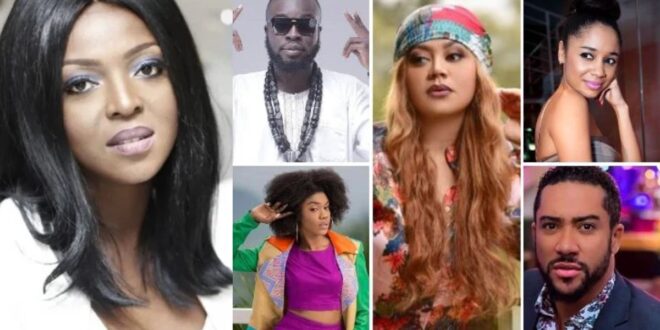 Ghanaian celebrities who were born into rich homes.

Being born affluent is a great thing, as it provides the individual with many benefits and guarantees that the individual can have a promising future.

We’ll look at some Ghanaian celebrities who come from a wealthy family in this article,

Hajia Buari, a beautician, and Alhaji Sidiku Buari, an ace musician and producer, are the parents of the young Ghanaian actress.

Nadia is a daddy’s daughter who has won two Africa Movie Academy Award nominations for Best Actress in a Leading Role in 2007 and 2009.

He is the son of Tsatsu Tsikata, a Ghanaian lawyer and former CEO of the Ghana National Petroleum Corporation, and Nana Nketia, a lawyer and pastor at International Central Gospel Church.

He is the grandson of J.H. Kwabena Nketia, a pioneering ethnomusicologist and composer in Africa.

Yvonne Okoro is a Ghanaian actress who was born to a Nigerian father and a Ghanaian mother. According to different accounts, her father is a prosperous businessman and she comes from a rich background.

Yvonne is one of Ghana’s highest-paid stars, with a home in East Legon before entering into the film industry.

Majid Michel comes from a rich background; his father is Lebanese and his mother is Ghanaian, and his family owns much of the thriving businesses and nice homes in Accra’s Cantonment neighborhood.

Majid Michel has received many awards in his acting career, including the Africa Movie Academy Award for Best Actor in a Leading Role in 2012.

Rebecca Akosua Acheampomaa, better known by her stage name Becca, is the fifth of nine children born to the Acheampong family.

D-Black is a Ghanaian hip-hop artist whose real name is Desmond Kwesi Blackmore, and his father was businessman and entrepreneur Mr. Derek Blackmore.