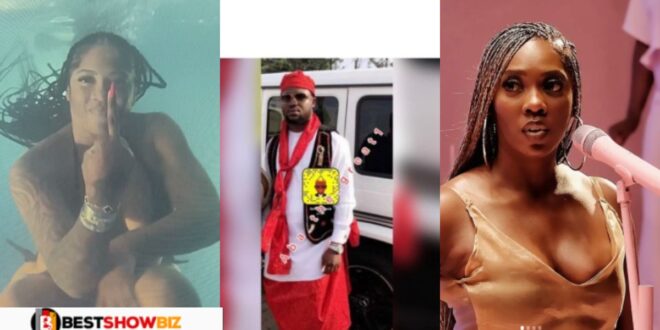 A “big boy” from Lagos to Accra has found his way into Tiwa Savage’s pants, and the evidence has been exposed.

An interview with Tiwa Savage recently surfaced in which she confessed to being the target of blackmail by someone who is in possession of her s*xtape.

Someone is extorting money from her because he has her s*x tape, she explained.

It was not long before information about the man’s identity began to circulate online.

One of Accra’s biggest ballers, known as Abolo in social circles, is said to have recorded the video.

Despite being Nigerian, he is well-known for his lavish lifestyle and is a frequent visitor to Accra’s nightclubs.

According to reports, the video was accidentally posted from his snap. He is a married man who brags about his wife on social media.

He is rumored to be close friends with men dating Sandra Ankobia and some of her close friends, so of course our queens have ties to him.

It was rumored that his motivation was to gain bragging rights. He did it in order to reveal to his friends that he was dating Tiwa Savage.

Read Also  Sad: Scenes from funeral of Uber driver who was murdered by KNUST final student