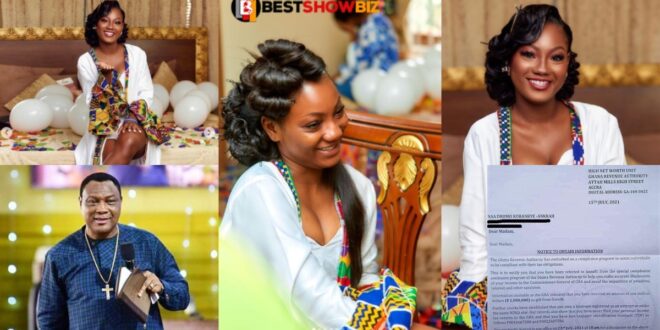 The uncle Sam of Ghana, GRA, has decided to pursue the daughter of Rev. Sam Korankye after she reportedly received a wedding gift of $1 million.

The Ghana revenue authority has asked her to report to their office for further inquiries about the money and her businesses.

Naa Dromo’s wedding was the talk of town a few days ago because of the huge money she got as her wedding gift.

On Friday, July 23rd at 10 am, GRA wrote her an official letter demanding her presence.

The Rev Sam Korankye Ankrah’s daughter, Naa Dromo, has a firm registered under the name NDKA Star with two separate (TIN) or identity numbers but has never filed her income tax reports, according to the Ghana Revenue Authority.

To avoid future accusations, GRA has invited Naa Dromo to assist them in obtaining further information and to begin paying her taxes.

Friends of Naa Dromo gave her a million-dollar cheque, which made headlines.