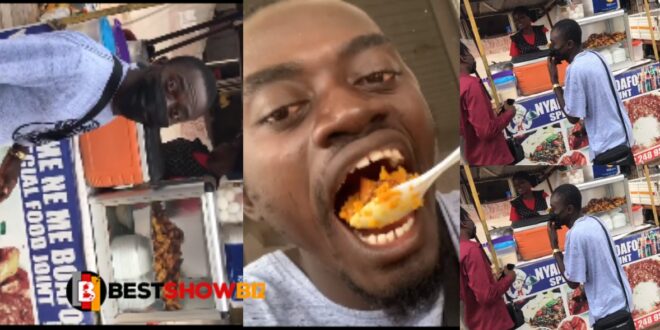 Ghana is hard: Lilwin claims after being spotted buying ‘Gob3’ in new video

He said so in the Akan language in a new video seen by Bestshowbiz.com and motioned with his hands that the hardship has grown extreme while he stood by a gentleman who was also buying ‘Gob3’ that is Gari and beans

This may have been his response when they asked why he had come to the ‘Gob3′ joint.

People who are broke or have little resources are known to consume this cuisine since it is affordable and plentiful.

As a result, the actor entered the line to wait his turn, following which he purchased a bag of boiling beans with fried plantain and one boiled egg.

Read Also  I’m better than Agya Koo, Lilwin, Akrobeto and all the actors in the industry – Kwaku Manu claims(Video)

He is also overheard urging the bean merchant to add extra gari to make it harder.

After that, Lil Win is seen enjoying his meal.