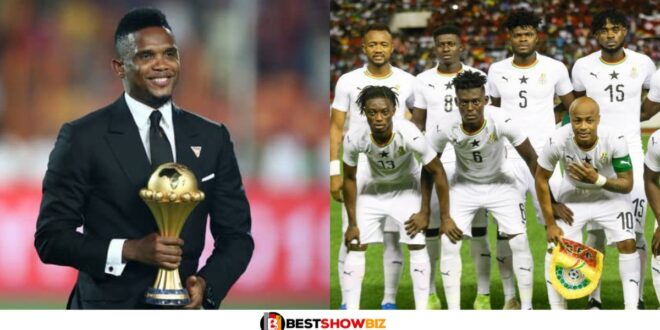 Samuel Eto’o, a football legend from Cameroon who is presently in Ghana, gave an interview today on the Warm Up Plus show on TV3.

During the course of the conversation, Eto’o mentioned that he has a strong hope that an African team will win this version of the World Cup, which will be hosted in Qatar.

The last time an African nation fared particularly well on the global stage at the World Cup was Ghana in 2010. The Black Stars finished in the quarter-finals with a good chance of moving on to the next stage, but their hopes were ultimately dashed as they were eliminated.

Read Also  Don little confused as his girlfriend asked him to marry her. (photo)

Samuel Eto’o, while appearing on TV3, disclosed that Ghana, just like any other African country, has a chance of bringing the trophy to the African continent for the first time.

Every World Cup is unique. We want African teams to partake and have a good World Cup.

“Why not? An African team can lift the World Cup. Ghana missed it by a shot.