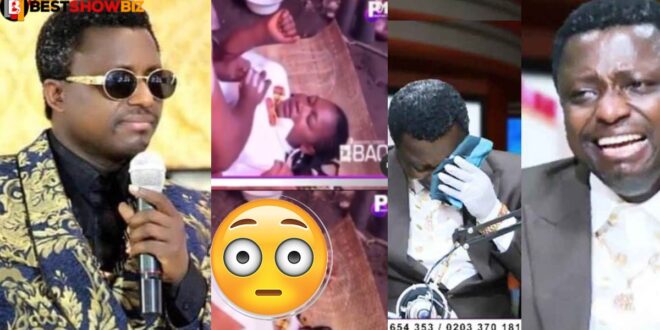 The Ghanaian Film Classification Committee (FCC) has requested all in-house content from Prophet 1 alias Opambour, including the sexual content he presented weeks ago with classification documents.

This comes weeks after he shared sexually graphic content on his own station as a precursor to a sermon.

Opambour, who was preaching against fetish priests who sleep with their clients, intended to utilize the film to illustrate his sermon and make his point.

But just as it was going to happen, he told his producers to stop it. Sure, he injected his characteristic wit into the whole thing.

His actions did not impress the regulatory board who chastised him for the infraction.

Read the complete (FCC) statement below:

The Film Classification Committee (FCC) of the National Film Authority has sighted pornographic content being shown on Prophet One TV.

In this content, Ebenezer Adarkwa-Yiadom also known as Prophet Opambour played a TV host recounting a sexual incident between a fetish priest (male) and a woman purported to be his client.

The FCC has publicly announced that all audiovisual content must be classified before the exhibition. In furtherance to this, all broadcasting channels have been directed to classify in-house content according to the film classification criteria given.

The FCC is requesting the management of Prophet One TV to provide the National Film Authority with the classification documents for all its in-house content including the pornographic content shown, by the close of day on 10th September 2021.

Kindly note that anyone who fails to comply with the film classification rules shall be subject to the Offences and Penalties in Section 27 and Forfeiture of Equipment in Section 28 of the Development and Classification of Film Act 935.