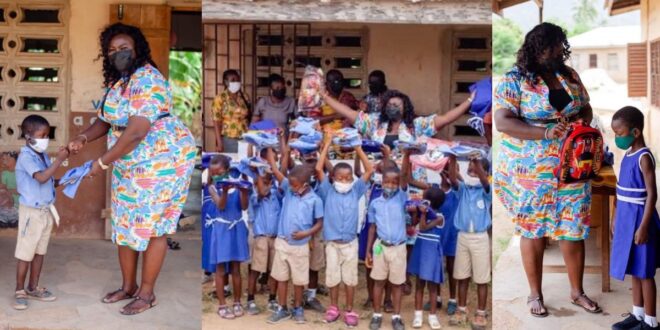 GES praise the Teacher who painted classroom and bought Uniforms and Clothes for her students. (photos)

The Ghana Education Service (GES) has honored Mad. Gloria Efya Lardi, a teacher in Koforidua Municipality who spent her own money on school uniforms, books, and pens for her students.
Gloria Efya Lardi, a Ghanaian female teacher, has relieved some parents’ financial pressures by using her salary to purchase bags, uniforms, and shoes for her students.

She presented the objects to the King of Gloria Presby Basic School in Koforidua’s Eastern Region’s New Juaben South Municipal.

After painting the classroom, Madam Lardi recently issued 10 school bags, stationery, 26 pairs of shoes, 21 pairs of socks, and some underwear for the girls.

Read Also  Police Officer storm school with his squad to harass teachers for disciplining his daughter.

Her unusual act of compassion touched most social media users and online news portals, and she went viral.

In a Facebook message, she, on the other hand, explained that she does what she does for the schoolchildren.

“I taught for five years in the KG department and I was doing all these things, buying uniforms, stationeries and schoolbags because most of the parents were finding it difficult to provide these basic things for the kids. Which makes the kids unhappy anytime they come to school. I thought it wise to be their second parent anytime they are with me in the classroom.” She explained her reason for helping the kids.

In a letter to Mad. Gloria Lardi Adakuruge, an old teacher of King of Gloria Presby Basic School, the New Jauben South Education Directorate expressed its gratitude for her donation to the girls.

The following is the full text of GES’ letter: