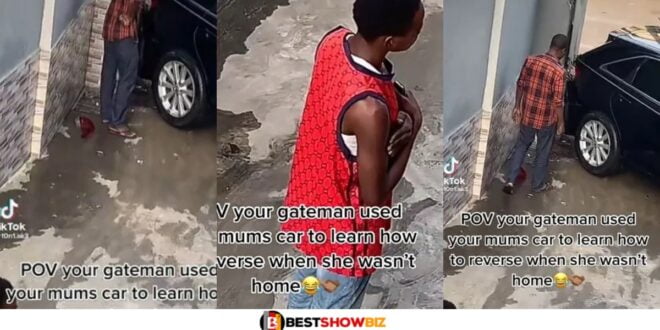 A young man got himself into significant problems after he wrecked the car belonging to his employer, most likely while he was trying to win the favor of the attractive young women in the neighborhood.

According to the narrative of a video that has since been shared, he damaged his madam’s SUV while attempting to learn how to drive in the compound.

As can be deduced from the sounds heard in the background of the clip, the gateman took advantage of the time he had to kill while waiting for his mistress to leave the house in order to give the whip a test drive, but things went terribly wrong.

When he hit the rear bumper, the gate came dangerously close to coming off its hinges.

Read Also  'I Will Only Settle My Beef With Shatta Wale If It’s Not For The Camera, It Has To Be Real' – Sarkodie Claims (Video)
Share