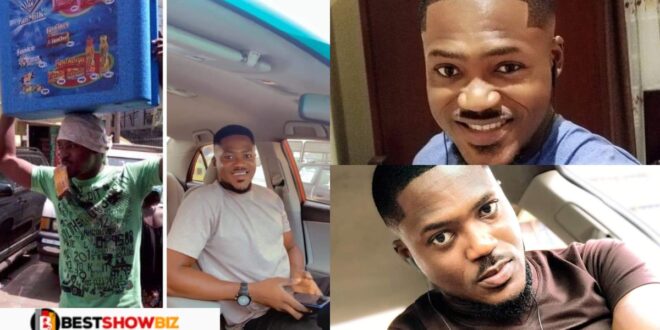 From Selling Yogurt to becoming a successful businessman, Meet Emmanuel the university graduate who took his destiny into his own hands.

Everyone is looking forward to going to school until they graduate and learn there are no jobs waiting for them.

Some individuals who graduated with first-class degrees are still unemployed and are compelled to work menial jobs to make ends meet.

This was Emmanuel Mark’s situation until he discovered a way out of this chaotic maze of existence.

“It all started in 2014, after I finished my National Service.” I began by drafting applications and submitting them to firms in the hopes of being hired. After a string of setbacks, I decided to take matters into my own hands and launch a small business. Because I didn’t want to be a burden on anyone, I took to the streets of Kumasi to hawk and make a living. On the streets, I began selling Yoghurt in an ice chest. My perseverance paid off in the end, and I can only thank God for how far he has carried me.”

Emmanuel made the decision to tell his fellow grads who are seeking white-collar joobs to take a break and hustle. He said that as long as what they are doing is real, it would eventually pay off.

” Get up, my fellow graduates, and take a chance.” You can’t always rely on others. Begin with the little materials you have available and be patient. You’ll get fantastic results if you do it at the proper moment. “I am not wealthy, but I am no longer dependent on anyone.”

Take a look at some of his images below;