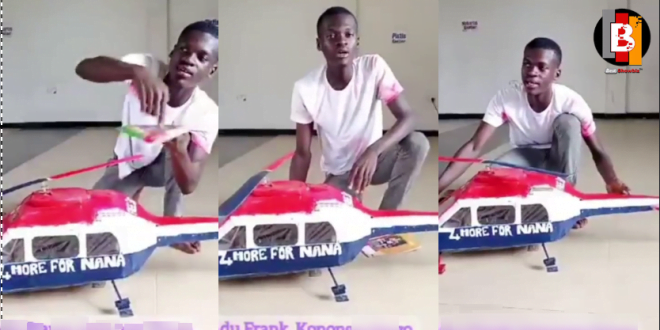 17-year-old Frank Adu, a second year student of Konongo Odumase SHS, has hand build a mini helicopter to honour President Nana Addo for giving him the freedom to secondary education.

The young man who hails from the Asante Akim Central had his helicopter painted with NPP colors and had “four more for Nana” and “Free SHS” written on the windscreen and the side.

Though the mini-copter has not yet been able to take to the sky since the currently installed engine was not designed for flight, Adu says he will not give up until it flies as he called on for support to help install a powerful engine.

Sharing his story after his innovative work went viral, Frank Adu revealed that his economically deprived background was a challenge to his education. He stressed that but for the intervention of the Free SHS policy, he would have dropped out of school.