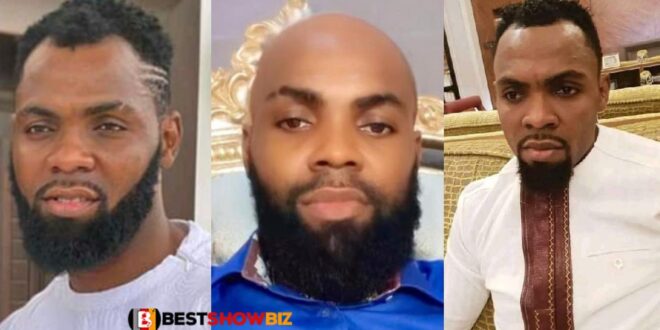 Men alter their haircuts on a daily basis merely to seem different for their wives. Some guys favored or preferred certain haircuts, such as the blowout, low fade, shaved sides, undercut, and dreadlocks, to name a few.

In today’s article, we will look at several types of haircuts worn by one of Ghana’s most well-known pastors. Reverend Obofour is the name of this well-known, attractive, and wealthy clergyman.

He is a man of God who is serious about his appearance and appearance. He is always striving to seem attractive and powerful.

This is most likely why Reverend Obofour, formerly known as Asanteman Bofour, has changed his hairstyles. Many Ghanaians have dubbed him “swag pastor” because of the haircuts he receives.

Netizens used to remark about the affluent and attractive pastor’s hairstyle whenever he changed it on social media. Some may defend his haircut, while others will chastise him for wearing such a hairdo as a man of God.

Rev Obofour, on the other hand, seems unconcerned about what others think about his haircuts. He is constantly altering his appearance with various hairstyles.

Many Ghanaians admire the great man of God who is the founder and leader of the Anointed Palace Chapel (APC) for his philanthropic activities. People detest him, though, since he is contentious.

Some of his haircuts are very lovely and inspiring in front of God and Man. Others are not much better. But keep in mind that no one is flawless.

Obofour may have his own personal motives for wearing the most unusual hairstyles. He most likely wants to appear good for her wife, Mrs. Ciara Antwi, who enjoys flaunting her big rear on social media as well.