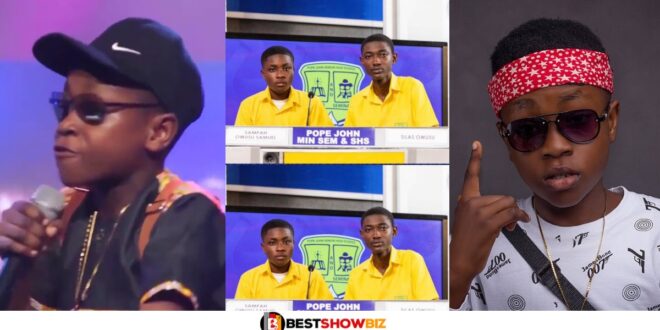 Samuel Owusu, a.k.a. Young King Clef, has set a new record for being the only person to have ever attained this feat in music. After winning the 2018 TV3 Talented Kids competition as a rapper in a battle that was fiercely contested, Owusu, also known as Young King Clef, won the competition. He then went on to compete in the National Science and Maths Quiz.

In the one-eighth stage of the popular quiz competition that is currently taking place on the KNUST campus in Kumasi, Samuel competed for his school against West Africa SHS and Fijai SHS.

After the match was over, Pope John earned 31 points, which was enough to advance to the quarterfinals, while West Africa and Fijai each earned 28 points. It is anticipated that Pope John will compete against Accra Academy as well as PRESEC Boys Legon.

Fans have been wondering about TV3 Talented Kids Season 9’s winner, Samuel, who has been absent from the public eye for nearly three years since he was announced as the winner. Nevertheless, the young boy is finally back, but this time it is not for music; rather for the National Science and Maths Quiz, where he will compete as a contestant on behalf of his school.

The young man with incredible talent is beginning the competition as a form 2 student, and he is the only SHS 2 student from his school to be competing. However, the most surprising aspect of the ongoing discussion on social media right now is about how the young man went from being a rapper to competing in the NSMQ for a prestigious school like POJOBA.

According to credible sources, Samuel decided to put his music career on hold in 2019 after returning from a trip to Dubai so that he could devote a significant amount of his time to furthering his education.

“Since he wanted to read Science, it was very necessary for him to pause with music and anything that comes with it strategically to get him to focus on his education. Entertainment was taking a great toll on his education”. our source disclosed.

After being seeded for qualifying to the quarter-final stage of the competition the previous year, Pope John began this year’s competition from the one-eighth stage.

On Thursday, October 20, Pope John Senior High School is scheduled to compete against both Presec Legon and Accra Academy.